Vote goes against Planning & Zoning Commission, which denied it unanimously

Vote goes against Planning & Zoning Commission, which denied it unanimously

Image of the Potomac Park area that was rezoned from “public open space and recreation” to “business park 50" during Centennial City Council's Aug. 1, 2022, meeting.
Image courtesy of the City of Centennial
Posted Tuesday, August 16, 2022 10:03 am

I don’t believe this meets the intent of what the property was originally zoned for, and so changing it, I think, would significantly affect that.”
Planning and Zoning Commissioner Commissioner Brian Beatty

As a member of this council, we’d already said these were the things we wanted to do for the betterment of the entire city”
Councilmember Christine Sweetland

How often does it happen, where P and Z [Planning and Zoning Commission] says one thing unanimously, and the council decides against it? How many times does it happen?”
Councilmember Robyn Carnes
How to contact Centennial City Council

Those interested in contacting members of Centennial City Council can email or call their representatives. Contact information is listed online: centennialco.gov/Government/Mayor-Council/Elected-Officials

Residents who are unsure which of Centennial’s four districts they live in can use the city’s property search website to find out: centennialco.gov/Online-Services/Property-Search

Community members can also attend Centennial City Council’s general meetings and voice their opinions during the public comment portion of the meeting.

During its Aug. 1 meeting, Centennial City Council voted 9-0 in favor of rezoning Potomac Park, located near the Arapahoe County Detention Center, from “public open space and recreation” to “business park 50,” after about 22 people voiced opposition during the public hearing.

The Potomac Park area, which is owned by the City of Centennial, is about 44 acres of land located in between South Potomac Street and South Blackhawk Street, below East Fremont Avenue. It was purchased by the city in 2010 and was officially annexed in 2012, according to the city’s staff report.

“The initial city vision for the property called for a programmed park to be constructed on the property,” said David King, the city’s development services specialist. “The city is initiating this rezoning plan as a result of policy decisions within the city and with Arapahoe County that make a park at the subject property not practicable.”

Part of the reason for rezoning the park is because there are other nearby regional parks that serve the area, King said.

The Dove Valley Regional Park is currently undergoing an expansion that the City of Centennial is helping fund, King said. The park was recently annexed into the city, according to the staff report.

Another reason for rezoning is because of recent changes to the city’s “Future Land Use Map,” a map that is part of the city’s comprehensive plan, called “Centennial NEXT,” that intends to guide land use decisions in the city and outline a development vision, King said.

The Planning and Zoning Commission approved an amendment to the map on June 22, which city council ratified on July 11, that changed the Potomac Park area’s future land-use designation from “parks and recreation” to “employment center,” according to the staff report. The employment center designation represents a variety of potential uses for the land, such as schools, commercial lodging and light industrial developments.

The staff report also states that the “surrounding context” of the Potomac Park area is compatible with a ‘business park 50’ zone district because the property is bordered on three sides by properties zoned to permit commercial or business park uses.

“Given the surrounding context and the patterns of development within Dove Valley, staff is recommending  the property be rezoned to ‘business park 50,’” King said.

Under this type of zoning, a variety of developments are permitted, including offices, nursing homes, live-work units and other light industrial developments, with a maximum building height of 50 feet, according to the city’s land development code.

The entire 44 acres cannot be developed because there is a portion of a floodplain on part of the property, King said. During the site plan process, the city will make sure the proper protections are in place for that area, he said. 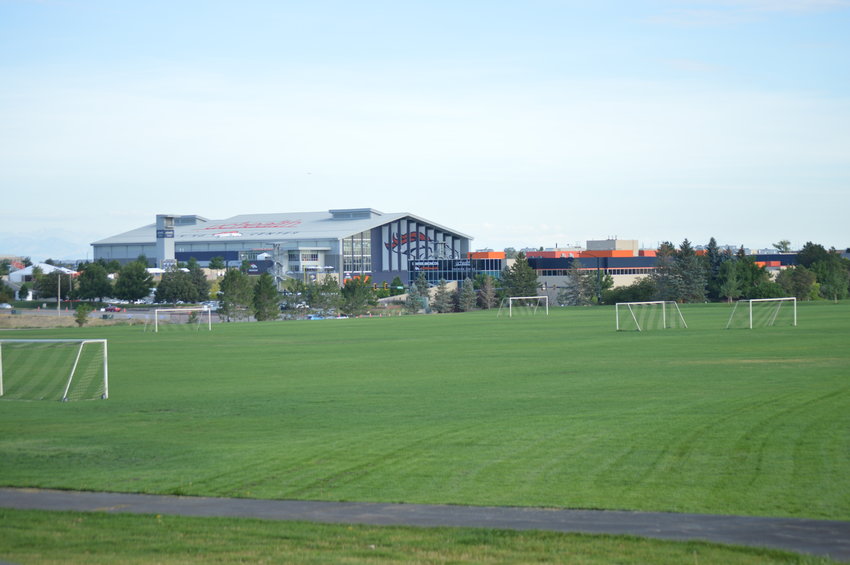 Before the City of Centennial owned the property, Potomac Park was previously zoned as “mixed use” under Arapahoe County, meaning a variety of land uses were permitted, including light industrial use, according to the staff report.

After the land was officially annexed to the city in 2012, the area was initially zoned as public open space and recreation.

Piko said she was on the Planning and Zoning Commission and was also the chair of the Open Space Advisory Board at the time the property was purchased.

“We had a plan. We met with potential sports teams that might want to do something. Nobody else could come up with the money to do it,” Piko said. “But what happened was … CDOT was forced to replace the Arapahoe bridge, and they used this property to stage that project.”

Once that replacement project was done, the city was able to make a trail connection under Arapahoe Road to Cherry Creek Trail, and “that changed everything,” Piko said.

It allowed for more funding to be put into the Cherry Creek Trail to make it connect to more areas, she said.

Since then, Piko said the city has worked to bring more connectivity to Centennial, such as through the ongoing Lone Tree Creek Trail project which helps connect Centennial Center Park to Cherry Creek State Park.

“The fact that the city council was never able to come up with a plan or make any kind of designation specific to what this land would be utilized for kind of says it all,” Piko said. “It is where it is — it’s an industrial area.”

The city’s Planning and Zoning Commission provides recommendations to city council as to whether the commission thinks the council should approve or deny certain ordinances.

During the commission’s July 13 meeting, about 11 people spoke in opposition of the proposed rezoning during the public hearing, many of whom lived on South Blackhawk Street, adjacent to the Potomac Park property, and were residents of unincorporated Arapahoe County, according to the meeting minutes.

Commissioner Bruce Rewerts thanked those who spoke during the public hearing, saying their comments were heartfelt.

“It had an impact on us. And I think, for the reasons you have all voiced, we agree that it doesn’t meet all the criteria,” Rewerts said.

Commissioner Brian Beatty said that if a private developer was approaching the city and requesting this rezoning, it likely would not happen. “And so, why does the city get to do that?” he asked.

Beatty also asked if other uses of the area had been considered, such as dog runs, bike trails or other uses that Dove Valley Regional Park does not have.

“This is an abrupt change from the intent,” Beatty said about the proposed rezoning. “I don’t believe this meets the intent of what the property was originally zoned for, and so changing it, I think, would significantly affect that.”

The commissioners unanimously voted to recommend that city council deny the proposed rezoning ordinance, claiming the request did not meet at least three of the nine approval standards, as stated in the land development code:

During the Aug. 1 meeting, city council members spoke to the rarity of approving something the commission recommended denying.

As the council was deliberating whether to approve the ordinance, Councilmember Robyn Carnes said it was disturbing to her that the commission denied it and that it was a red flag for her.

“I guess, I would just like to ask that question,” Carnes said to her fellow council members. “How often does it happen, where P &Z says one thing unanimously, and the council decides against it? How many times does it happen?”

Piko estimated it happens once every four to five years, and other council members also noted that it’s not common.

“So obviously, it identifies the stickiness and the difficulty of this entire, and the complexity, of this entire issue,” Carnes said. More than 20 people spoke during the public hearing at Centennial Civic Center on Aug. 1, 2022, in opposition of the proposed rezoning.

More than 20 people spoke before council during the public hearing Aug. 1 and asked that council deny the motion, raising concerns about the potential loss of the open land.

Most of those who spoke lived along South Blackhawk Street, and many of the speakers were unincorporated Arapahoe County residents, according to meeting minutes.

Multiple speakers expressed fears about how the rezoning could negatively impact their property value, such as if a 50-foot building was constructed on the land, as well as fears about a potential traffic increase and safety concerns. Others said there are already a fair amount of vacant retail and office spaces in the area.

People also spoke about the importance of open space to mental health and the need to protect the environment. Some attendees said they are worried that development on the land could increase the chances of flooding in the area.

Elizabeth Davis said she started an online petition on Change.org to reject the rezoning ordinance.

“So far, the petition has 399 signatures,” Davis said. “They do not want it to be approved, and they want the property to stay as open space and recreation.”

This is chapter one

Leading up to council unanimously voting to approve the rezoning, council members thanked the public hearing speakers and explained why they would vote to support the ordinance.

Councilmember Mike Sutherland said there is a “need for additional multi-use type commercial development” and he thinks the “business park 50” zoning is a good choice because it permits different potential uses.

“As opposed to some of the other land development proposals we get, the difference here is that the city actually owns the property. The city can control conditions on the sale of the property,” Sutherland said, noting that perhaps, in part of a site plan, a portion of the land near South Blackhawk Street, could be left as open space.

Selling the property would be a city council policy decision, and most of the sale proceeds would presumably need to be used for eligible open space projects within the city, said Neil Marciniak, the city’s community and economic development director.

Councilmember Tammy Maurer said she doesn’t think the land is helping the entire city under its current open space zoning. She said the city can benefit from being able to sell the property and use the funds towards open space projects.

Councilmember Richard Holt addressed some of the feedback he received from people who said they were worried a large warehouse could be built on the land.

“If something like that happens in any kind of plan or anything, that is such a hard no for me. But there are other tools in this tool belt, including plating, including site review, including having all of you as stakeholders in what happens next,” Holt said.

“You also have a voice of what happens next, and I encourage you to take this energy — this passion — and stick with the process,” he said.

Councilmember Don Sheehan agreed, saying he’d like to see people at the public hearing come back in the future.

“Don’t leave in defeat. This is chapter one. We want you back for chapter two, chapter three and a happy ending,” Sheehan said.

Marciniak also said staff can start to put together a list of conditions, such as potential easements, that council can consider placing on the property for future sale and development.